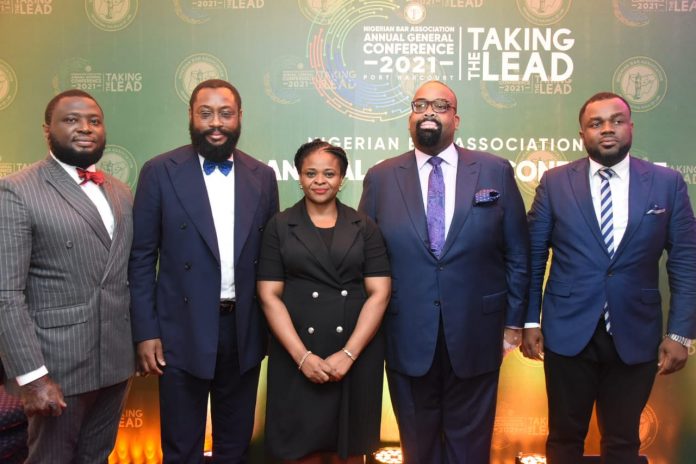 As one of the largest singular gatherings of legal professionals anywhere on the planet, the Annual General Conference (AGC) of the Nigerian Bar Association (NBA) is always an occasion that elicits high expectations from stakeholders within and outside the profession of law.

The 2021 edition of the AGC, slated for the city of Port Harcourt, the Rivers State capital from Friday, October 22 to Friday, October 29, 2021, promises to be a world-class hybrid affair (incorporating both physical and virtual participation) and as occasion for a dispassionate and exhaustive interrogation of the far-reaching impact of the health and socio-economic effects of the Covid 19 pandemic on the Nigerian nation and the world in general. Conferees are expected to proffer realistic and practical solutions on how best to surmount the challenges as well as maximize the opportunities presented by current national and global realities. It is a meeting that will also demonstrate the capacity and readiness of the Nigerian legal community – under the aegis of the NBA – to lead the charge in our collective quest for a paradigm shift in the way things are done in our country and continent in a bid to rewrite the African narrative, and also demonstrate the Association’s ability to adopt the requisite rules, processes and skills that enable this leading role.

The co-chairman of the technical planning committee of the Port Harcourt confab, Prince Akin Ajibola made these assertions at a press briefing on Thursday, October 21, 2021in Lagos to discuss his committee’s preparations for the event. He also disclosed that the Conference, the 61st since the NBA’s inception, will be held at the Yakubu Gowon Stadium, in the Elekhia district of the Rivers State capital under the theme, ‘Taking the Lead.’ According to him, it would mark a shift from the merely diagnostic character of past NBA conferences to a more proactive, solution-based one in a bid to actualize the NBA’s broad agenda for sustainable and inclusive transformation – as championed by its current President, Olumide Akpata. Triggered by in-depth discourses by highly accomplished stakeholders from various walks of life, and from across and beyond the shores of Nigeria, the gathering, he said, would feature over 20 interactive plenary and breakout session discussions on topical issues as well as current and emerging trends, plus a number of special events – including a documentary showcase, mentoring sessions for young wigs, cultural performances and sporting contests, among others.

Speaking earlier, NBA President Olu Akpata acknowledged that these are far from normal times – which is why, he said, this year’s Conference is being held in October rather than in August, as obtained in the past. A series of positive outcomes have, however, enabled the convening of the 61st confab, he said – not least of them being the enthusiastic response of lawyers of all categories and would-be participants as attested to by the robustness of the registration process. At the last count, Akpata added, over 9,000 have expressed their interest in attending the Port Harcourt gathering. He, however, lamented the apprehension of many would-be attendees who would stay away on account of the alarming security challenges in the country, and in particular the south-east geopolitical zone.

In the question-and-answer session that followed these remarks, a number of media practitioners present expressed interest or concern regarding a wide array of issues, namely: the perceived lull in the NBA’s interventions in various issues of public interest; the welfare of Lawyers With Disabilities (LWDs) and their full access to, and participation in, conference proceedings; the cost of the conference – in terms of registration fees, especially for younger lawyers; the progress, or otherwise, of the proposed amendment to the NBA constitution; the availability, or otherwise, of conference materials; the effectiveness, or otherwise, of the Association’s disciplinary mechanism; and the NBA’s commitment to the safety and security of lawyers (both in relation to attendance at the Port Harcourt event and in general – including the continued cases of police brutality, harassment and extra-judicial assaults on the persons, human rights and dignity of legal practitioners).

Other issues raised by the press at the briefing included the need to prevent current or erstwhile political players whose actions and attitudes do not align with the values of the NBA from taking advantage of the conference platform in any form or manner; the need to actualize the most important takeaways from previous NBA AGCs in its bid to create greater impact on the fortunes of the legal profession and the polity in general; the need to engage with such bodies as the Economic and Financial Crimes Commission (EFCC) and the Police in conference settings, in a bid to understand the rationale for some of their more controversial actions and policies; and the need to open up conferences of this nature to law associations and societies from other climes in terms of more robust participation, as a way of obtaining a more cosmopolitan view of legal practice in these times.

In her closing remarks, the chairperson of the media sub-committee of the 2021 NBA-AGC, Nta Ekpiken, disclosed that the Port Harcourt conference would deliver a highly tech-savvy event meant to enhance the experience for delegates and guests. Her assurances of a safe, secure and robust conference experience were echoed by another committee member, Kolawole Olawoyin, who delivered the closing remarks to bring the press briefing, which was anchored by the Publicity Secretary of the NBA, Dr. Rapulu Nduka, to a close.