Home Law 2019: I am ready to Sacrifice my Ambition for Restructuring—Atiku
LawPolitics
September 25, 2017

2019: I am ready to Sacrifice my Ambition for Restructuring—Atiku 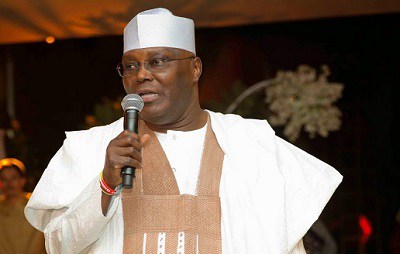 Former Vice President and All Progressives Congress, (APC) presidential hopeful,  Atiku Abubakar, has said that he was ready to sacrifice his ambition for the restructuring of the polity.

Atiku made the declaration at the weekend in Abuja while delivering a keynote address at a youth forum organised by a coalition of civil society groups under the auspices of Play Forum.

Restating his reservation towards the existing arrangement which he dismissed as unitary arrangement foisted on the nation by the military, he submitted that Nigerians need to discuss how to reform the structure of government to guarantee oneness among the federating states.

“I want to agree essentially that there is every need for us to sit down and talk about our future. This is because the arrangements in the last 50 years or so have not served us very well.”

“That was why I came out, some people even said to the detriment of my political career, to advocate for restructuring or rearrangement or whatever you call it of the present structure of the country. I still stand by it. But we cannot determine the nitty-gritty of this restructuring until we are able to dialogue and agree on how we want to continue to live together as a country.

“It is good that all the representatives of the ethnic groups agreed that we should continue to live together, I believe it is imperative.”

But I also don’t believe in the current arrangement which I have always referred to as unitary federalism which was a creation of a prolonged military rule.

He fingered the military regime of the late  General Murtala Muhammed which he accused of insisting on a strong centre while setting up Constituent Assembly in  1978 and called for urgent reform of the arrangement by all stakeholders in the polity to inspire economic development.

“It all started after the civil war when General Murtala Muhammed set up the Constituent Assembly of 1978 and specifically instructed the Assembly to recommend a very strong federal government which no component can challenge or try to secede.

“He was understandably coming from the perception of Biafra civil war. He felt that the war was caused by the region which felt that it was too independent to poll out of the country.

‘Subsequently, they kept amending the constitution centralising more and more power at the centre.”
He further noted that the military government failed to implement recommendations of the Constitutional Conference of 1994/1995 of a single term of six years for the President to rotate among all the six geopolitical zones.

“Of course, I was a member of the Constitutional Conference of 1994/1995 and what we actually drafted was not what they eventually came out with. We proposed a presidential system with a single term of six years to be rotated among the six geopolitical zones of the country.

“By now, about four zones would have produced the president. We also said that after 36 years, we could review that provision if Nigerians believe it is the best season, otherwise we could discard it.

“By the time we won the election in 1999, we saw an entirely different constitution. I was told that they set up a review committee headed by Niki Tobi, which tampered with the draft and ended up with the constitution we now have today.

“However, on a serious note, we have seen that the fact that a zone produced a president does not mean that he will get the zone developed. Former President Jonathan could not construct a road from Port Harcourt to Bayelsa.

“Even the South West road we started during our administration he could not continue. Until former President Obasanjo finished his eight-year term, he could not complete the road from Lagos to Otta
where his farm is.”

“Another issue that needs restructuring is the economy. Left for me, I will ask every part of this country to take charge of its resources while the federal government should handle defence, foreign affairs, immigration among others in the exclusive lists.

“I use to tell people that I would not have gone to school if I were born today. My parents were so poor they won’t afford to send me to school. I was born during the era education was free, food was free for me, I was sponsored from primary school to university. There was even a job waiting for me before I graduated. Yet there was no oil then. I am not certainly a product of oil boom Nigeria.

“So, I don’t know what those who are against restructuring are afraid of. Those afraid must be lazy. We fought the civil war with the Igbos.

Today, the Igbos have been completely rebuilt, but we still find mud houses in the north. Is it the fault of the easterners that the north is like that?” he said.

“So, there are more fundamental issues that we need to deal with after which we would have settled on what basis we want our federation to be. How do we draw the boundary because even the Ijaws are not contiguous to each other? I come from a state where we are minorities.

In Adamawa, whether you are Hausa, Fulani, Christian or Moslem, you are the minority. It is the same thing in Taraba.

“I think that what is most important is the devolution of powers and resources with the various governments whether states or regions. How do the people hold those in power accountable for the resources handed over to them?

“We are not as educated as we are today in the first republic, yet it beats my imagination how those in charge of the Local governments were more efficient, honest and transparent in accountable administration.

“Since we have agreed to remain one successful country, it is not complicated because you can start with all the recurrent items in the constitution. The President can dialogue with the governors or
National Assembly for states to take charge of the roads, hospitals, schools and such other items in the concurrent list while the federal government will continue with items on the exclusive lists.”